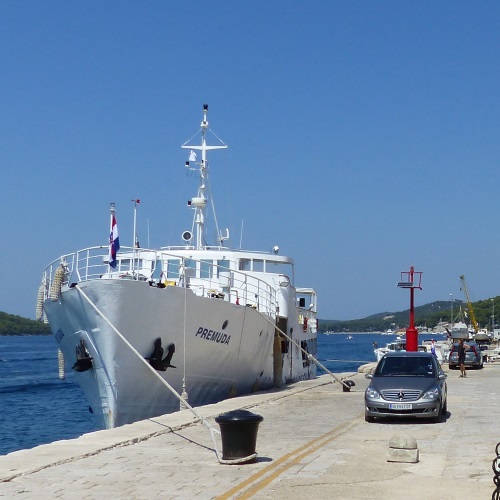 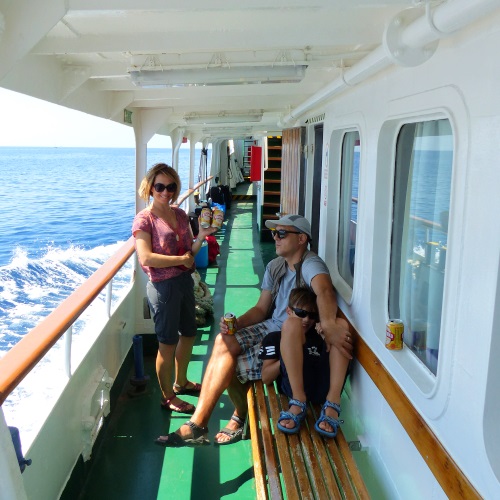 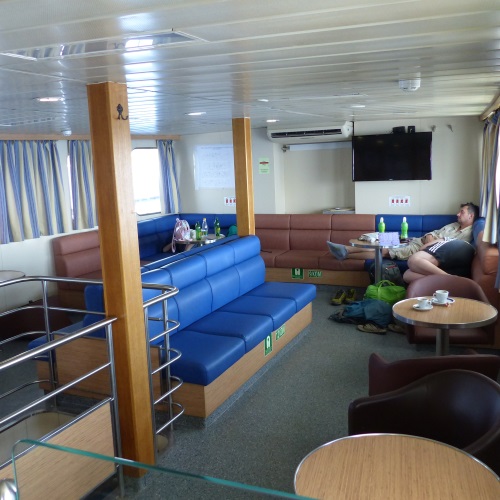 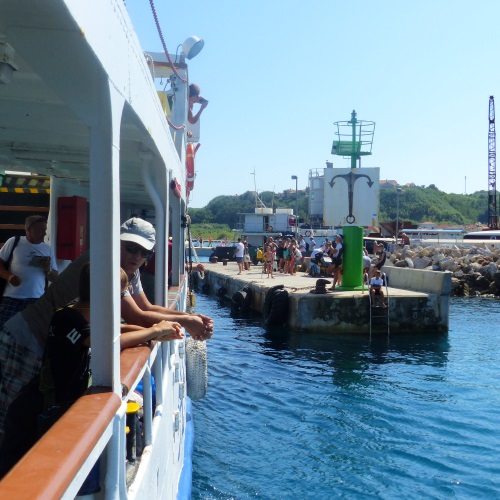 Premuda is an old ship which connects most of the surrounding islands with Mali Lošinj. Although the ship probably wasn’t built for this purpose, it is used for transporting everything from people, post, food to construction material.

Bow, area around the main entrance of the ship, corridors leading to the stern, benches alongside of them - all of this is used as storage space for luggage and all the stuff previously mentioned.

If you arrive around 12:00, you will have plenty of time to put your luggage on board the ship Premuda and have something to eat. But first go and buy tickets. They are sold in an office just across the road from the ship.

If you haven’t had the time to buy the tickets in Mali Lošinj, you can still do so on the ship. After the ship leaves the port of Mali Lošinj, one of the crew members walks around the ship and checks the tickets. You can buy one from him.

Premuda’s crew usually allows passengers to start boarding their stuff about one hour before departure time. So if you get there too early, you’ll might have to wait before you’ll be allowed to board. Even then you might try asking some of the crew members - it’s pretty much informal, so if they like you they might allow it earlier.

On Susak Premuda lands starboard (right side), so it might be wise to put your belongings on that side of the ship. This will make unloading stuff at Susak much more efficient.

Note: don’t leave you documents, money, laptops and other valuables on the ship. There’s nobody keeping an eye on it.

After the tickets are bought and the luggage transferred to the ship you might still have some time left before the ship sets sail. You can use this time have a lunch, do some shopping, or go for a swim.

Make sure to read the section dedicated finding your way around Mali Lošinj.

Finding a place to sit

You will probaly want to sit away from the scorching sun. Shade can be only found in the crowded corridors and inside the ship, where there’s a bar.

The interior of the ship resembles more a waiting room of rheumatic clinic - it’s crowded with usually older local people, who are passing time by complaining about their diseases and discussing latest Spanish soap operas.

The best place you can sit is probably the stern and the bench near the engine room (if you don’t mind the noise).

Sitting on the upper deck is also not a bad choice, although you will not be protected from the sun. At the peak of the summer season all the seats there are also taken.

The sailing schedule can be found at (www.jadrolinija.hr). Since if differs depending on the season, make sure to enter the correct date under traveling period.

If you missed the morning boat

The ship Premuda leaves for it’s round twice a day. If you arrived too late and missed the ship morning round, you do not have to wait for the afternoon one! There are lot of small ships which make site seeing tours to the surrounding islands.

These ships are docked along the cost in the city center - you shouldn’t have problems finding one. In front of the ships usually there’s a sign stating the departure time (usually around 10am) and price. You should try to negotiate a discount, since you are traveling one way only and will not be using services of the guide.